FFO: FASHION AND ACTIVISM – A PHOTOGRAPHIC EXPLORATION INTO THE LGBTQ COMMUNITY 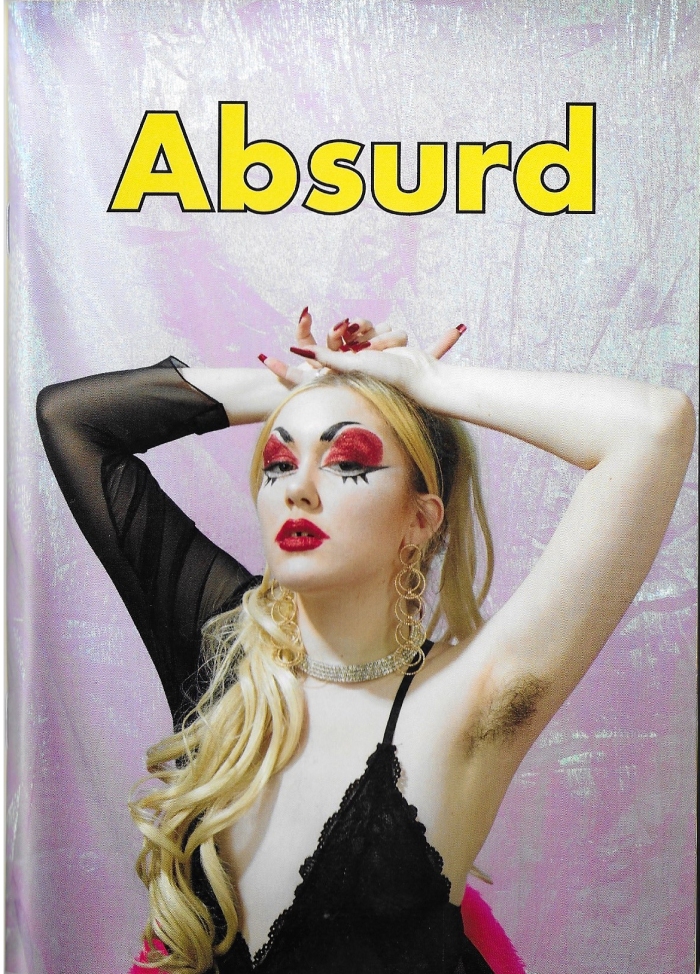 Though the title ‘Absurd’ may initially be seen with hesitation as the dictionary definition of absurd often refers to ‘odd’ or ‘weird’, the photographer instead aims to cleverly use the word ‘absurd’ to comment on how LGBTQ community are often negatively branded with this label; mainly due to peoples lack of knowledge or sadly general ignorance towards the community. By naming the series ‘Absurd’, the photographer plays on the meaning of the word by instead using this photo series as a platform for the LGBTQ community to speak out and educate readers about their different sexual identifications; therefore leading the initial definition of the word ‘absurd’ to become meaningless.

The zine opens with a short introduction by the photographer, in which she talks importantly more about the intensions of the project:

The 44 page photo-zine uses stylistic fashion portraits shot within a studio environment alongside supporting text interviewing the subject about their identified gender/sexual orientation within the LTBTQ community.

The zine introduces first the name of the model, and then explains their indentified gender/sexual orientation: 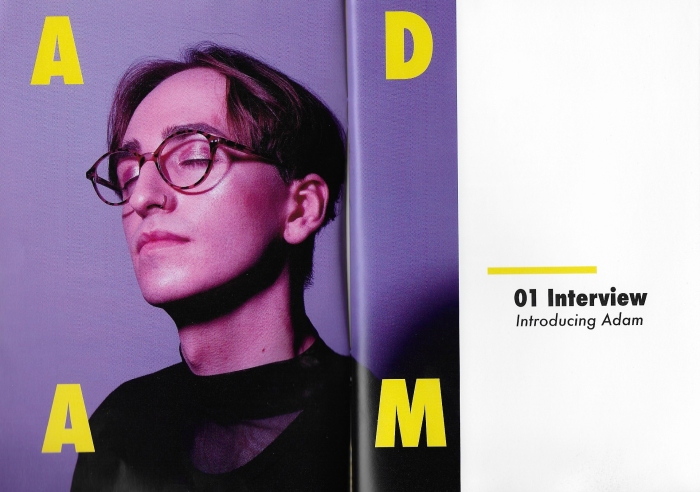 THE IMAGES, PRESENTATION AND DESIGN OF THE ZINE

Both the images and choice of design adopt bold aesthetics, which works hand in hand to create this beautiful A5 zine. It is easy to see how much consideration and thought has went into styling each model through their choice of clothes, make up and jewellery; as all of these aspects are used as a form of expression to describe more about the person. The front cover image of the zine for example is particularly very strong visually, with the model drawing you to look further into the image with her eyes. This continues even within the colour palette adopted by the photographer, through deciding on what coloured or textured backdrop to use, as well as through the choosing what colour gels and lighting could be used to enhance the portrait. I think that the use of the different colour gels in particular matched with the soft lighting in some portraits gives a really pleasing look to the images; adding a dreamy aesthetic to the portraits.  Though many fashion based shoots heavily benefit from the work of a stylist, it is clear to see that the photographer in this case instead is talented in both roles.

Even though the zine is rather text heavy in order to help inform the viewer about the models and people who are part of the LGBTQ community, the images strongly still remain one of the main focal points of the zine. Though the portraits would still work amazingly as stand alone images, it is important that the supporting text was integrated within the zine, in order to use it to fulfil the projects intensions and give more of an insight into the model being photographed. 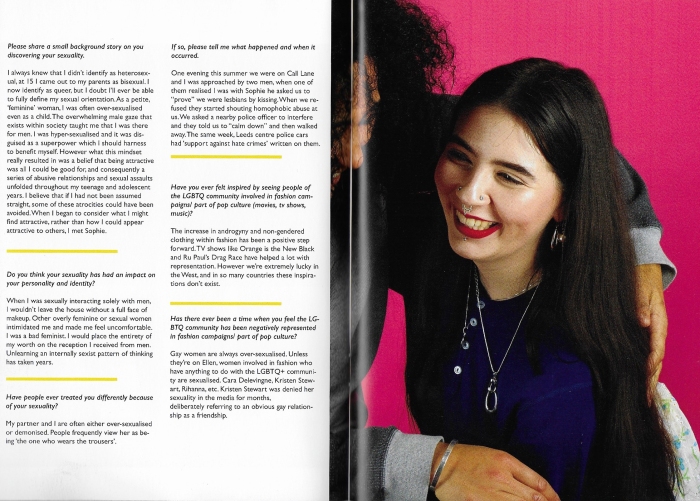 Through the photographer working with the Graphic Designer Alice Morris to help create the zine, the choice of design and their use of colour cleverly integrates both the use of text and image equally, showing importance to both the role of the photographs and the supporting text. Absurd is a perfect example to show how working with a graphic designer can help to uplift the whole look of a publication in order to match the quality of the images taken by the photographer.

The zine being sized to A5 works well as a format which particularly makes it more portable and easier to pick up and read as the zine uses a lot of text, or to instead be easy to admire the images. Though if the photographer ever intends to exhibit this photo-series i’d really think they would suit being printed much bigger, to a huge size actually, in order to focus all the attention on the visual quality of the images alone. 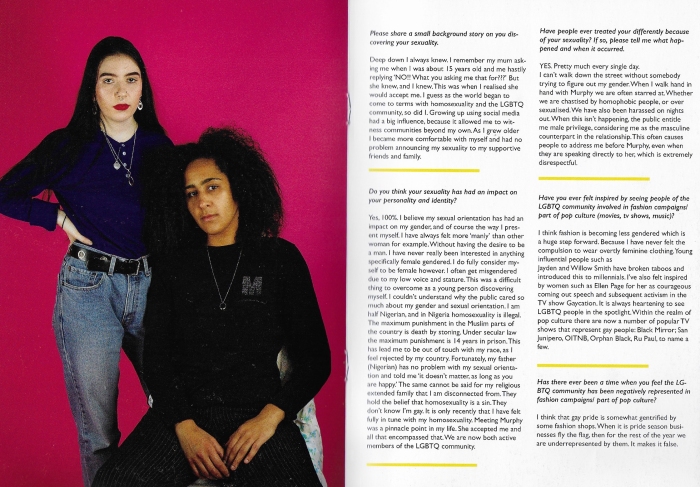 44 pages is the right size for the zine too, as it’s not much of a handful to read yet it spreads its attention on 5 key identifications within the LGBTQ community. I do however think the project could benefit if the photographer continued to photograph more people that identify with other gender or sexual orientations within LGBTQ in order to give more of a fair representation of the community, which would help to improve peoples understanding of other identifications such as those that identify as Transgender. However if the photographer decided to not revisit the project, the zine and the photo-series still works incredibly well to importantly celebrate and educate people on the LGTBQ community. 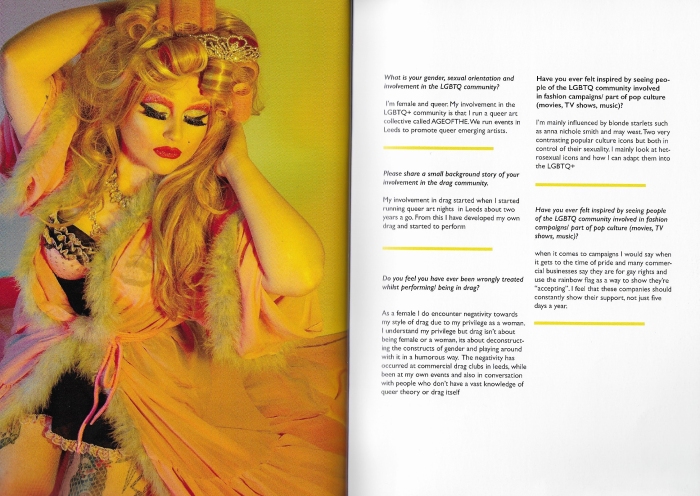 It’s a really pretty zine featuring images from a series matched with only good intensions. It’s a solid zine that can easily be appreciated by anyone; not just those who are fans of photographs.

Where can i pick one up??

You can purchase this zine directly from the photographer by contacting her via her website or instagram !