FFO:  AUTOBIOGRAPHICAL BODIES OF WORK THAT LOOK AT THEMES CONCERNING PHOTOGRAPHY AND MEMORY WITHIN FAMILY LIFE AND FRIENDSHIPS 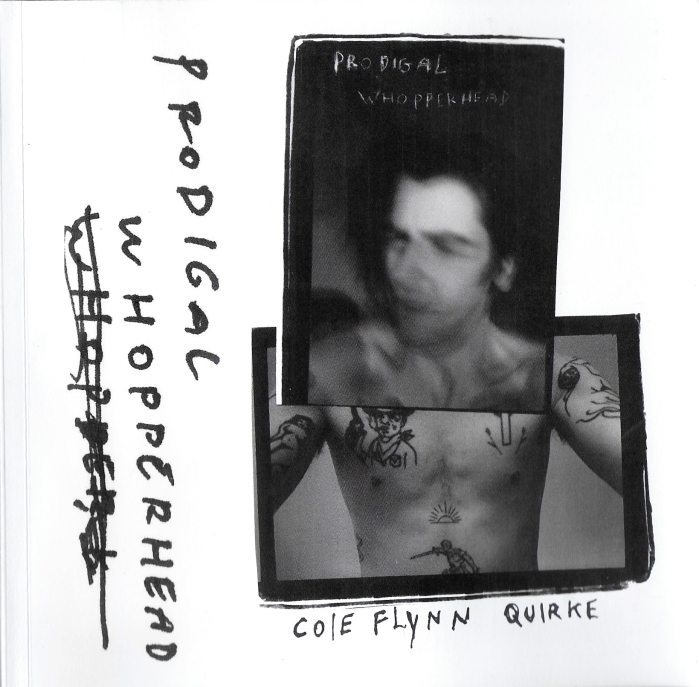 CONTEXT BEHIND THE ZINE (IN THE PHOTOGRAPHERS OWN WORDS):

‘Prodigal Whopperhead is a personal time capsule, capturing 365 days of my life during a transitional period. It is an attempt to memorialise everything I hold dear: I’ve taken photographs of my family, close friends and people I love hoping that, were I ever to lose these memories, the pictures may be able to bring them back.

I never knew my grandfather, he died from the complications of early-onset dementia before I was born. The fear of inheriting this condition stalks me.

These photos document my time spent in New York, Marseille, Berlin, Amsterdam, Brighton and London analysing details that are extremely important to me. The body of work is highly personal, it is a first-hand insight into my life. My aim was to expose myself in a way which creates a relatable bond between reader and photographer.’

‘Prodigal’ by definition refers to ‘spending money/ using resources freely and recklessly’ and ‘Whopperhead’ refers to being a bit of a stoner or an idiot… which I feel provides a  very relatable title to that of young people being reckless and getting up to dumb stuff; which really helps to create very ‘whimsical’ imagery as described within the foreword and celebrated within the entirety of the publication.

CFQ: The book title is a loose connection to a parable from the bible called The Prodigal Son. It’s about a pissed off kid who gets his inheritance early from his father and blows it on a bunch of superficial shit then returns to his father seeking forgiveness. My twist on the title is a hybrid of this passage and a bizarre insult a man called me when I was smoking a spliff. He called me a Whopperhead – I guess it’s slang for ‘stoner’.

A loose definition of the word Prodigal is to use resources freely and recklessly; wastefully/extravagant. I’ve used my memories wastefully and have forgotten a lot of important things in my life so the title is referring to the returning of important memories that could easily escape me.

So in many ways, the title Prodigal Whopperhead is about me.

The whopping 128-page book that includes images shot over a year period is also accompanied by the zine Prodigal Wasteoids which features both shot imagery by the photographer and archival imagery, notes and cut-outs from magazines – this publication acting as a sketchbook/supporting work file to Prodigal Whopperhead. I think including this supporting zine along with the publication is HUGELY important and should be appreciated by the reader as it reveals the process behind the scenes of the project; showing the longwinded process behind planning and shooting and editing the series – allowing the reading to see the decisions behind the creation of the project. Prodigal Wasteoids beautifully pays tribute to all aspects of the photographic process that enabled the formation of Prodigal Whopperhead.

CFQ: Prodigal Wasteoids has its name because it’s photos I took that weren’t used for the book and work from my sketchbook which I was using throughout the year I worked on the project. Wasteoids is far more cryptic in its imagery in comparison to the book so I called it Wasteoids to challenge the theme of wasted memories and the preserving of them.

The front cover image of the photobook creatively features a constructed self-portrait made using two small black and white prints overlaid on top of each other; one image focuses closely on the photographer’s chest and tattoos whilst the other photograph is a figurative motion blur shot of the photographer’s face  – which almost really cannot be distinguished. This autobiographical body of work is complimented greatly via its personalisation by Quirke; from opening the book with an experimental self-portrait alongside using handwritten text to form the title and the foreword (written by Mojo Gavican Camm).

The excessive overload of images included within the book distinguishes single moments that Quirke decided to denote particular importance to and photographed over the period of 365 days. Deciding to photograph in this way would mean that Quirke should be equipped at all times to shoot; which made using the Leica M6 a fitting camera to shoot on. Quirke’s images were mainly shot using either Kodak Tri-X 400 (b+w) and Kodak Portra 400 for colour images. 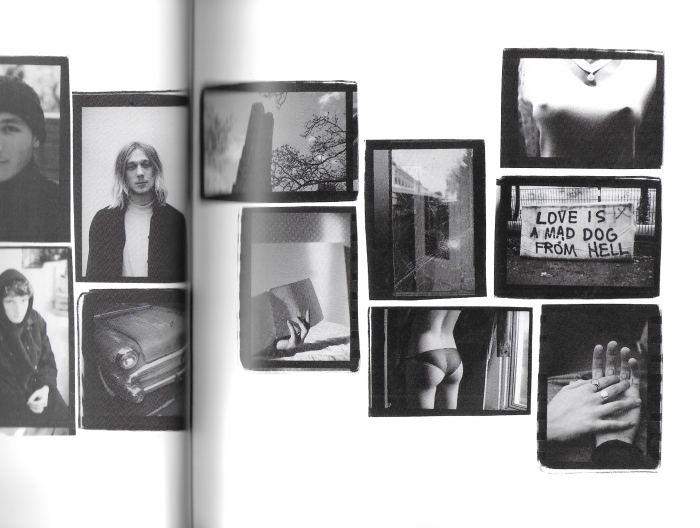 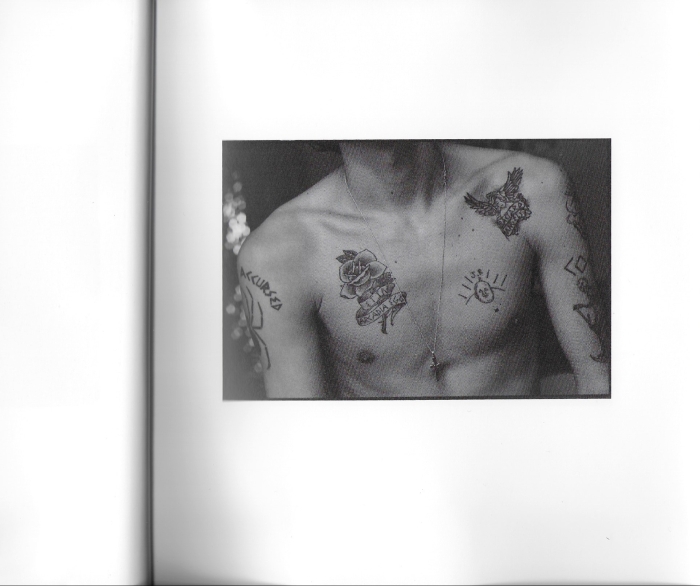 Shot with the intention of preserving memories within his photographic response to tackling memory loss, Quirke’s images document his familiarity with both people and place using a range of approaches, though informally photographing portraits of his friends drinking or skating or generally just goofing around or instead using the camera to create formal portraits of his peers; considering framing and lighting much more within these particular images. This can also be seen within the portraits of the photographers close family, using a more formal and considered approach of shooting to reflect his admiration for them. Quirke also includes more raw and intimate snippets that draw into his sexual relationships. The photographs document the beauty of the ordinary and much as they do the unordinary; the shocking image of the fishheads lined up on the pavement below sticks out greatly within the publication as seen below.

The entire body of work takes inspiration conceptually and visually from photographers such as Jim Goldberg, JH Engstrom, Stephen Shore and Larry Clark; though Quirke’s work stands far separately with his own gritty, yet thoughtful and honest approach to photography. 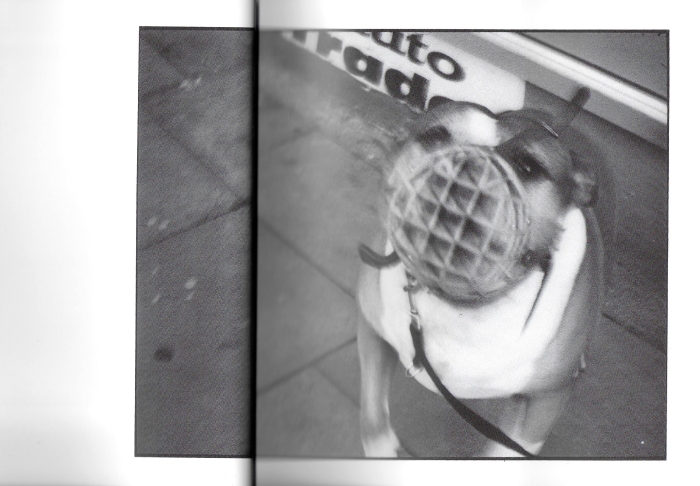 DESIGN OF THE ZINE:

The 128-page 210 x 210mm square photobook released as an edition of 50 was the first book to be published under the name ‘Devils Point Press’, which is the photographers own publishing company.

The publication experiments with a series of layouts which helps to keep the reader entertained. Most images are placed on a singular page surrounded by white space, though the design is switched up through the amount of imagery included, as well as with the scale and sequencing of the photographs.

As stated previously, Quirke’s handwritten text opens and closes the publication which helps to contextualise the project further and this makes the book more personal to the reader; in oppose to using a standard typeface. The closing text tugs at the readers heartstrings (or it did mine) with Quirke referencing a lighthearted yet emotional conversation that was had between his Grandmother and Grandfather suffering greatly with dementia. The text takes into account how the fragility of memory effects the ageing brain, yet not all memory is lost in those that are living and even if the memory of faces are forgotten feelings of love and happiness continue to live on. 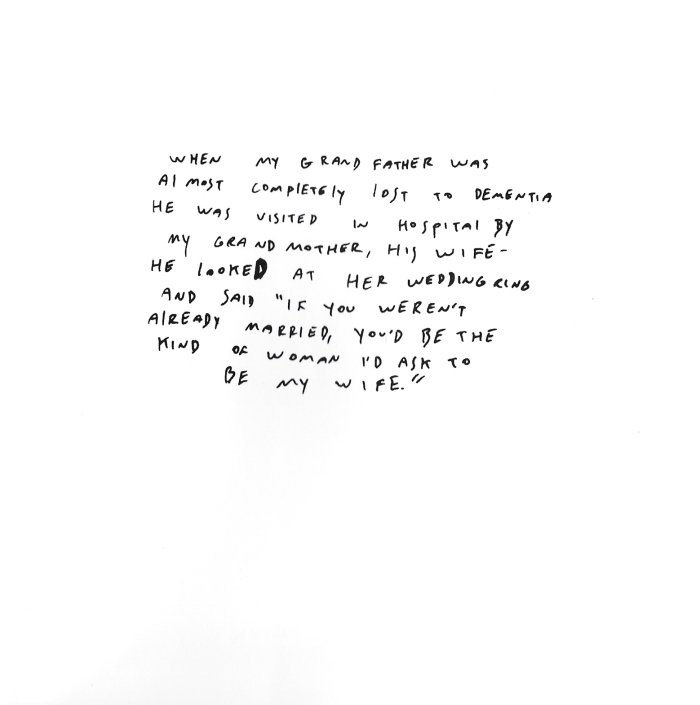 DIY YOUTH: If there’s one thing you could add/change in relation to the publication/project, what would it be? Or would you not change anything at all?

CFQ: I would have liked to have been able to travel to more places that are important to me however funding wouldn’t allow it!

From a rather biased perspective – this book is absolutely exceptional. The photographs are raw and honest and relatable and beautiful. Everything about the book is deeply considered, from the thoughtful handprinted photographs to the personalised design and the delicately written lighthearted text. In fact, it was the first book I’ve refused to send back after a review because it was so good. Definitely a well-spent £15!

I find it difficult to give constructive criticism. Obviously, there are more ‘visually pleasing’ images than others included in the edit, but cutting these out would completely disregard the concept. Maybe the book could’ve benefitted from the use of more text? Though at the same time I admire how the photographs speak for themselves. The project could have possibly taken different directions, possibly focusing on more of a collaborative project between himself and his grandma or maybe the series could’ve experimented more with other wider formats – the possibilities are endless. However, I think as the project stands personally it couldn’t have really been improved by much. The publication is a beautiful testament that makes the reader appreciate life more; through the relationships we form and the memories we make.

YOU CAN ALSO BUY THE PRODIGAL WHOPPERHERD PUBLICATION HERE FOR £15:

Any profit made from the sales of the book will be donated to a charity called ‘Playlist for Life’ which works towards restoring memories of people who suffer from dementia and Alzheimer’s through music.